Where the Health Centre and car park now stand on Whitley Road, was Trinity Methodist Church, built in 1889. This was destroyed by a 500lb bomb during World War 2, on the night of 29th August 1940, during a particularly heavy enemy aircraft raid. The nearby Recreation Club and bowling green and two houses in Cheviot View also received direct hits from 3 x 250lb bombs

Directly opposite the Health Centre are numbers 2 and 3 Catherine Terrace, built by John Pratt in 1867, according to the date plaque. They are the oldest houses outside of Whitley Village. The terrace was named after the wife of Mr Hunter, one of the first residents. 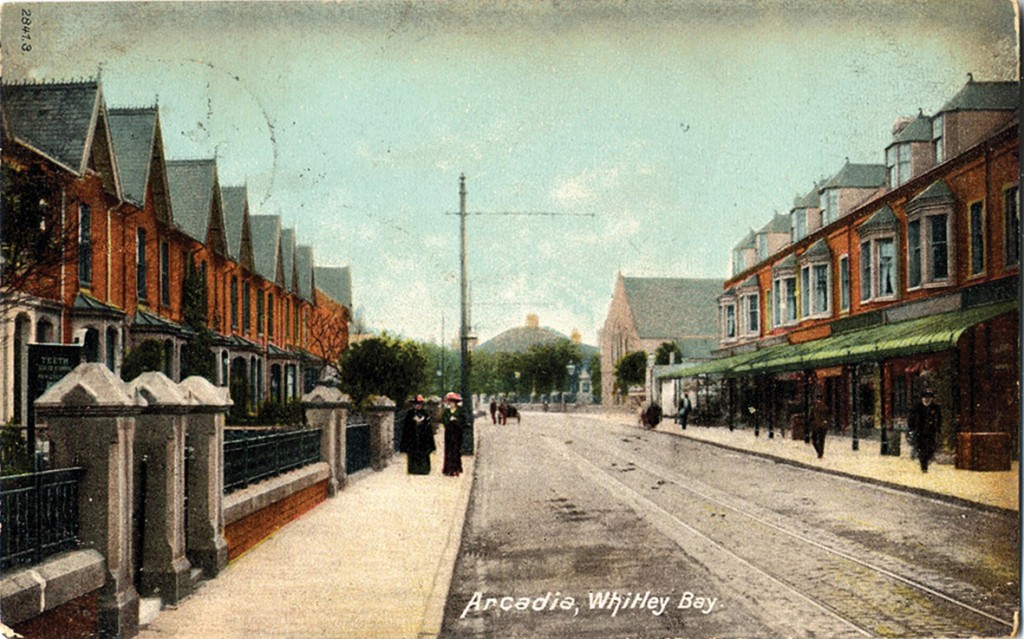 The shops on at the south end of Whitley Road were called ‘Arcadia’. These were built in 1899, by Alfred Styan, to serve the new housing and expanding local community. Stylish glazed canopies, supported by an iron framework, covered the street in front of the arcade of shops, which was a feature seen in many ‘modern’ seaside resorts of the time. At the northern end of the terrace was George Whitehead, a photographer and chemist. Cycleries (now Cheng’s restaurant) was a bicycle shop, run by W.A Laws. Other resident businesses included Smurthwaite Bros., the fruiterers and Story’s Hardware. The tram ran past the shops, from the town centre to the seafront. A dating plaque can still be seen high up on the wall.